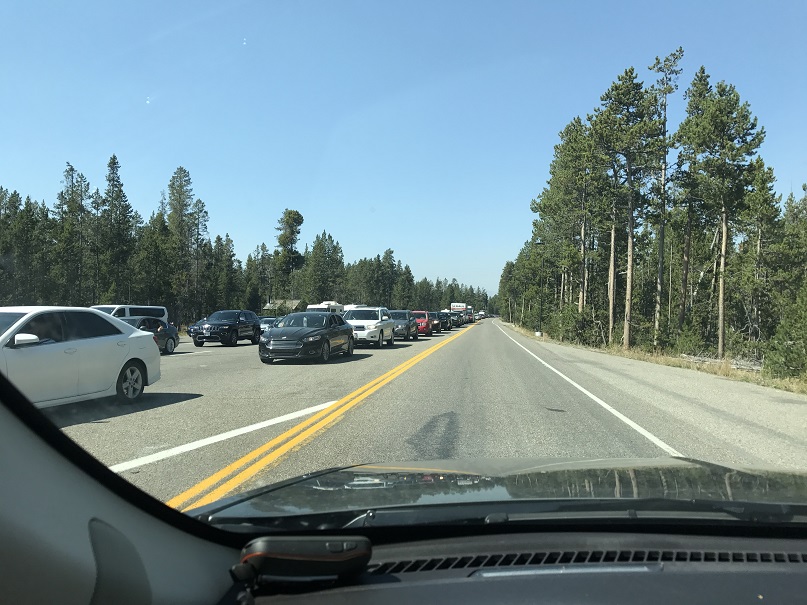 Waiting to enter at West Yellowstone

Before leaving Yellowstone, we traveled from our Madison Campground to the Norris Geyser Basin for a short walk among the thermal features there.  Then we exited via the West Yellowstone Entrance, where hundreds were lined up to enter the park on the Labor Day weekend.

After lunch in West Yellowstone (and Wi-Fi to catch up on emails, etc.) we headed west into Idaho, then quickly north into Montana. In the process we crossed the continental divide for the fourth (into Snake River Drainage) and fifth (back into Madison/Missouri River drainage) times. Just as we were heading out of Idaho into Montana we experienced the modern version of cattle herding with ATV’s ridden by young women with purple hair supplementing riders on horses, wearing baseball caps.  See the video here:

Having been along this route before we know the scenery is spectacular, but like the rest of the Northwest, it was clouded in smoky haze.
On September 3, we were mostly on I-90, making tracks for home. We detoured for auto tour in nearly dead “historic” Butte and then stopped in Deer Lodge, where Cynthia visited an art gallery and a prisoner craft shop across from the “Pen” which is still mostly in a 100 year old sandstone building on main street. Meanwhile, Larry napped in 92 degree heat. 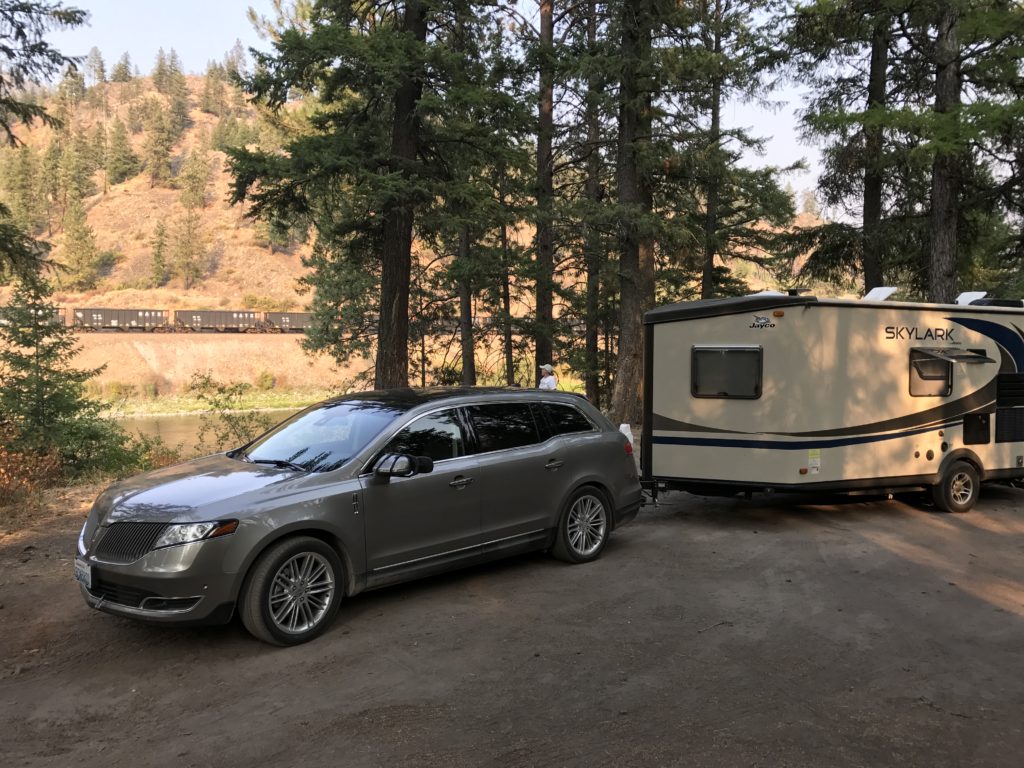 We proceeded through Missoula and on to St. Regis, where, after failing to get into a Forest Service Campground on the Clark Fork river (it was full) we had our “serendipity moment” when we found an unmarked campground right on the river, which was both free and devoid of neighbors, other than fishermen in their drift boats going by. A very peaceful spot, not considering the BNSF trains that rolled by on the other side of the river every hour or so.

September 4th was out longest day in terms of mileage as we went about 250 miles to the Potholes State Park south of Moses Lake. We stopped in Wallace for brunch, finding three out of four restaurants closed and plenty of parking on a “holiday dead” downtown. Everyone we met commented that the smoke was the worst that they had ever experienced. We understood that most of it was coming from Canada and Montana on unusual northeast winds.

September 5th was our final day, going along the familiar I-90 to I-5 route back to our Olympia home, also still covered with smoky haze from the various regional fires.