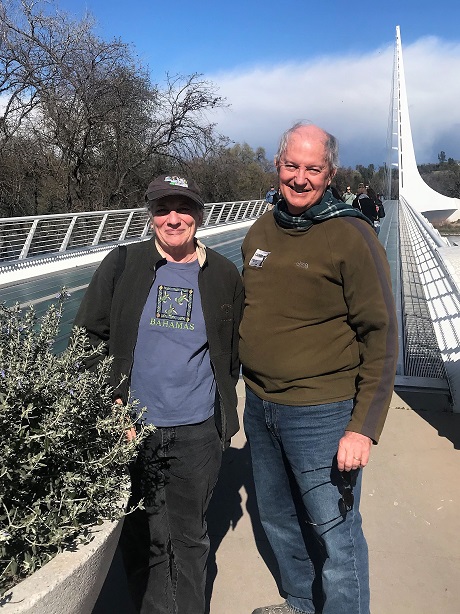 Cynthia and Larry at Sundial Bridge

We arrived in Redding in the early afternoon (Feb.17) and stayed at an RV park along the Sacramento River. By dropping from the 4100’ elevation of Klamath Falls to 350’ of Redding we also managed to enjoy afternoon temperatures near 60 degrees. Not quite the 78 degrees of the prior week, but pleasant nevertheless, allowing us to enjoy a walk along the river, loafing in our chairs outside and decent weather to get out the grill and cook some hamburgers.

Our main event the next day was to visit the Turtle Bay Exploration Park in downtown Redding by the Sacramento River.

This area has been reclaimed from a gravel operation that was used to produce the 600’ tall Shasta Dam a few miles away. Now there is a botanical garden and museum and many trails leading up and down the Sacramento river. While the winter season was not optimal for enjoying the botanical garden (and we were putting up with very windy weather), we did enjoy walking a couple of miles through the garden. The focus of the garden was plants of a “Mediterranean climate,” similar to that of Redding, so there were areas focused on South Africa, Chile and southern Australia.A feature of the Turtle Bay park is the Sundial Bridge providing a pedestrian crossing of the Sacramento River on a glass panel, cable-stayed bridge. The tower of the bridge is oriented in such a way as to serve as a sundial, with hour markers about 20’ apart on the ground.
After this excursion, we had most of the afternoon to loaf and prepare another meal grilled outdoors.