Our usual February Sun break involves flying to San Diego, Palm Springs or Tucson, but with a vigorous flu season underway, we decided to avoid crowds. Cynthia discovered a “Winter Bird Festival” in Klamath Falls, Oregon, coinciding with our dates, so we decided to head there. Despite growing up in Medford, 70 miles to the west, Cynthia had never been to Klamath Falls, but I had been there various times, passing through on trips from Moscow, Idaho to the Bay Area.

Starting on February 13, we enjoyed sunny and easy trip south on I-5 with the Skylark (trailer) and stayed at a Lane County Park on the McKenzie river in Coburg, near Eugene. In the morning we headed up the Willamette River to go east over to the Cascades towards Klamath Falls. However, about 40 miles to the east, we encountered a warning sign that the road had packed snow and ice and that towing vehicles were required to chain-up. Even though I have had years of experience driving on snow in northern Idaho, I did not want to chain up do it with a trailer. So we reversed course and headed back to I-5 and then South toward Medford hoping for a snow-free southern route. However, the infor- 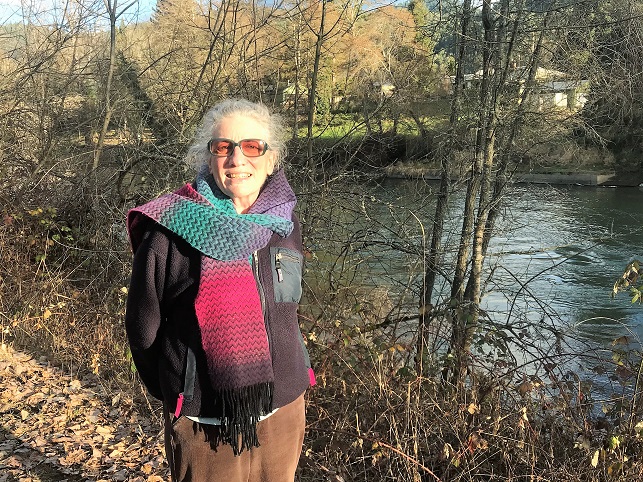 Cynthia along the Rogue River

mation on highway conditions on those routes were not better: “Severe Winter Weather” warnings on each route.   So we decided to camp a the “Valley of the Rogue State Park between Grants Pass and Medford. We enjoyed a hike and actually had a valentine’s day dance to some nostalgic tunes in the Skylark.

The next day we got the encouraging news that the southern route had no warnings and “bare pavement.” The weather was sunny, but as we got above 4,000’ on this narrow and windy route (OR 66), we encountered many stretches of icy or snow packed road. We proceeded cautiously and managed to make it to Klamath Falls by 4:00 PM on Feb. 15th. We had reservations at a nice resort, “Running Y,” so parked the trailer in their parking lot while we enjoyed the resort.